On 25th January this year’s International Black and White Days in Osnabrueck combined a show of 81 individual cows, 2 daughter groups with 10 milking heifers in each group and finally an interesting Top Genetic-Auction. 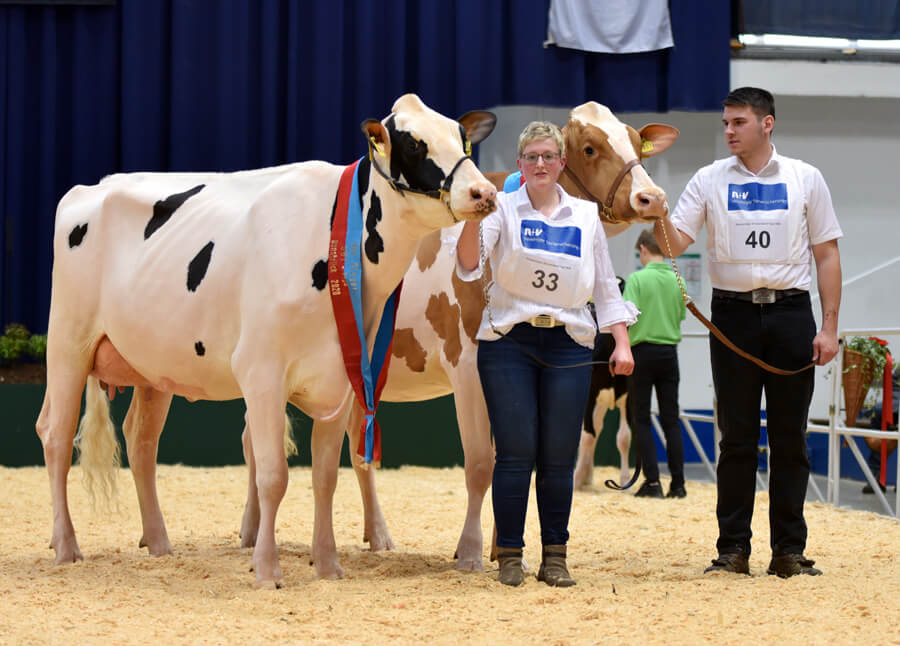 Within the group of 1stcalf cows the judge, Dirk Haßbargen, wanted to see youthful looking heifers that have lots of potential for future development. His winning young cow was NN Safira from Neßlage and this Red & White offers with Redstream x Apple a real type pedigree. The closest contenders were actually genomicly interesting cows: from both of them fullsisters have been sold as young calves 2 years ago at the Top Genetic Auction. So Reserve Junior Champion goes to the white (left) Gymnast Palina from Redecker and the Honorable Mention Title went to MUH Adagio Clarinette from Udo Marquard. Actually pretty soon a halfbrother to Clarinette, the Lightstar-son LINDY (160 gRZG) will become available as new sire of sons in the OHG lineup. 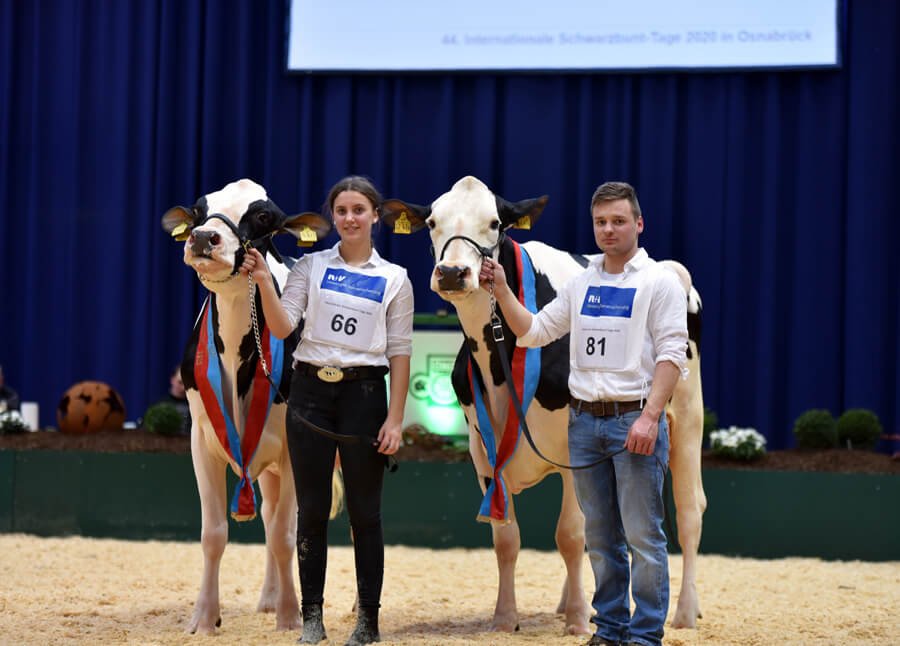 In the Intermediate Champion selection finally HAM Fiere Lady from Bielefeld’s in Dalvers became the champion. She traces back to the famous Ugela Bell-daughter Fiere EX-96. The Reserve Champion in this category was Defender Henrike exhibited by Frank Neßlage. He actually purchased her about 2 years ago at a regular Osnabrueck auction sale for 2.500 €; breeder of this strong udder cow is Annen, Loxten, who is also the breeder of the famous Ramos bull. 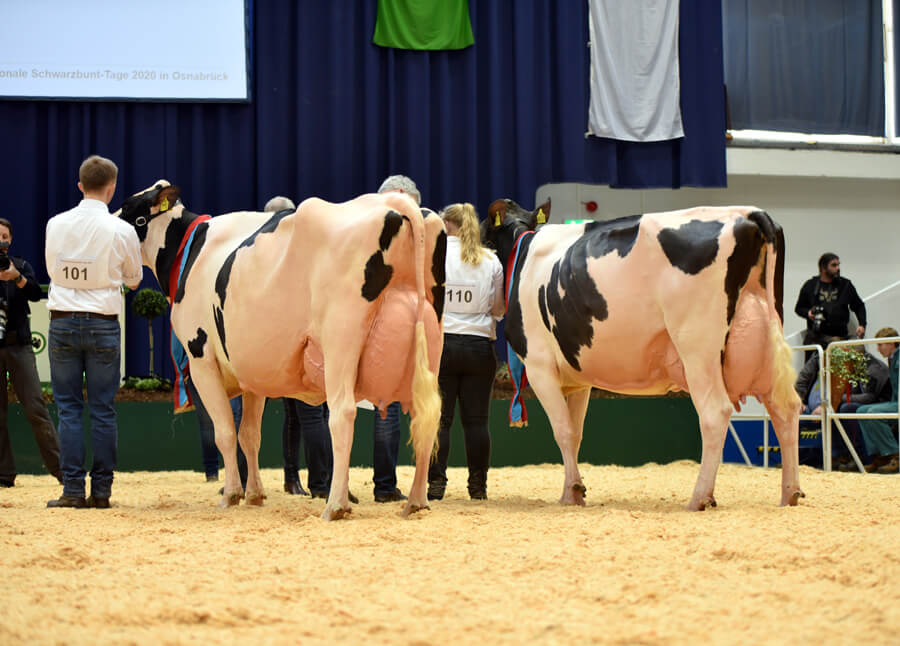 The competition within the Senior Cows was pretty tough and tight. For the final lineup of the 3 cows for Championship judge Haßbargen selected a very impressive type and frame cow, GoB Epochal Delphine from Goldstein, the last year champion cow MEY Micah Dagmar with her impressive and extremely firmly attached udder and finally Boss Annalena from Kolckhorst-Kahle. Because she finally had more strength and power along with an extremely impressive high and wide rear udder judge Haßbargen made KKH Boss Annalena Senior Champion. She was actually in 2016 already Junior Champion and so it is her 2nd win at the International Osnabrueck Black and White Days.

After a short lunch break OHG presented 2 very uniform daughter groups with 10 daughters each group. The first group were mostly black stylish daughters of the OHG Missouri-son Milton. MILTON is actually the first proven bull out of the very intensively used bulldam Snowflake Mabelle EX-90. Beside Milton OHG purchased several additional bulls like KENT, ROLLS, ROYCE or as well as brand new sire of sons CALVIN out of this Mabelle-family. Therefore the high quality of the Milton-daughters particularly in terms of udder texture and good legs was an exclamation mark for the potential of this special cow family from Gr. Honebrink. Later on the judge selected actually 2 Milton-daughters, WFL Tiana from Linkmeyer and Eleisa from Bunge as the best young cows in the daughter group competition.

Afterwards for the first time a group of a homozygous polled bull was presented in Osnabrueck. POWER PP is a Powerball-son out of Shotglass and he traces back to the famous Beachlawn Cleitus Pro cow family. He received his first daughter proof result in December with just 17 daughters for production and 14 for type. In the meantime several more Power PP-daughters are in milk and actually the average first testday production and as well the average classification improved reasonably. Therefore OHG is very positive about the future development of Power PP’s proof in the next sire summary. The 10 daughters on display impressed by her frame, ideal positioned wide rumps and as well good udder attachments. Almost all of the displayed Power PP-daughters produced between 35 and 40 kg of milk per day. 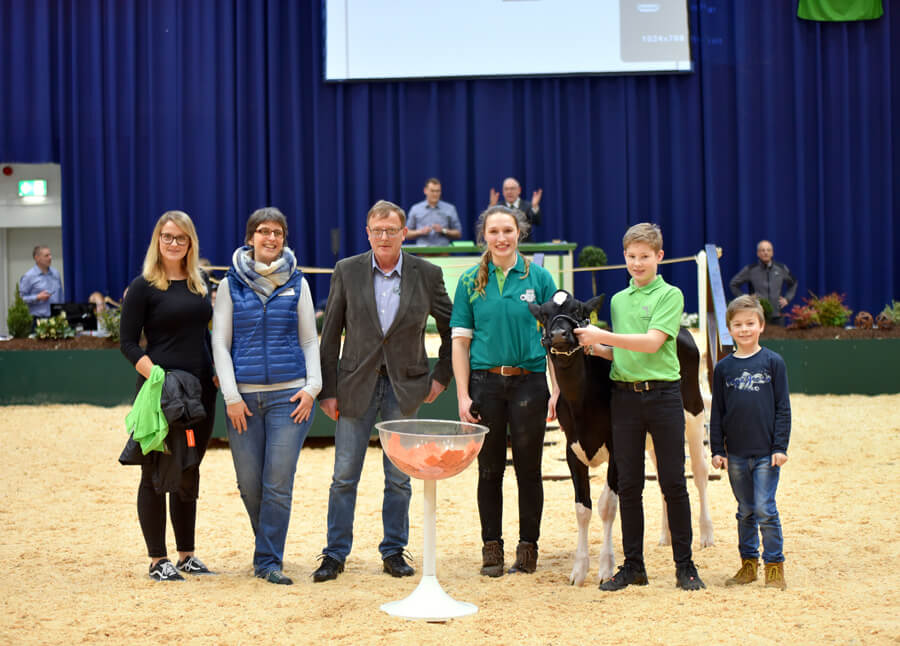 The Osnabrueck young breeders always offer a nice calf during the show event and part of the surplus is always donated to a children hospice in Osnabrueck. This year the young breedes selected a very nice Milton heifer out of the wellknown S-family from Bunge. So the request for ticket numbers for the raffle calf was higher than it used to be in the previous years. Finally the donation was tripled once more because the lucky winner, OHG-employee Arnold Strehl, decided spontaneously to offer this heifer right away for the auction and donated a major part for the children hospice as well. So finally in the ring was a group of several happy winners of this year’s raffle calf by the OHG young breeders club.

In this year’s Top Genetic-Auction was a combination of 3 already milking heifers with special pedigrees, some type heifers and finally mostly high genomic calves. From the milking heifers the lot No. 1, the Trend-daughter Meghan out of the Snowflake Mabelle-family, was the one with most demand. She finally was purchased by a breeder from Westfalia for 5.000 €. 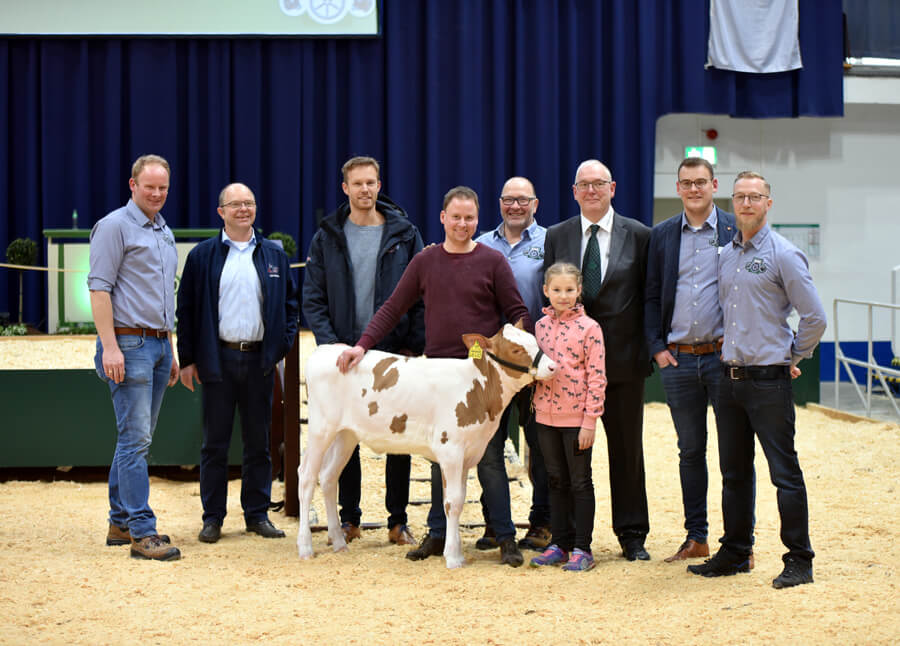 From the genomic heifers the Red and White polled Sunny P (Solitair P x Lucky PP) had the highest overall genomic index with 164 and offered as well a real complete and nice genomic profile. Due to this overall quality along with the cow family (Snowbiz Sympatico Sofia) there was as well international demand in this heifer. Finally CRV (Netherlands) purchased her for 23.000 € and so she will probably produce interesting offspring in the future for the CRV breeding program. 2nd highest genomic heifer was Rihanna, the No. 1 Prosperous in the German system. This already soon flush age heifer combines 159 RZG with a nice and deep pedigree going back to the Roxy-family. The sale average of all lots was 6.085 Euro.